If you are interested in the truth, then I hope you will join me as we seek to discern it.

I am particularly interested in the intersection where thoughts and theory create real world consequences.  With government policies, economics, science and faith.

I like to focus on discerning the truth from the noise and the lies, and on this blog I relate those findings, hopefully with a fresh and unexpected perspective.  I’ve been posting since 2010; I hope that you will sample some of the threads, and pass them to others.  And please also subscribe, using the red button in the right column on any blog page, to receive posts and newsletters in the future.

But my favorite medium for communicating the truth is fiction.  Truth wrapped in fiction has the power to engage the reader’s mind, heart and spirit.  So it has the power to transform.  For example, I wrote On The Edge twenty years ago, but current readers say that the book has changed their lives.  Obviously there is more at work than my own writing.

From that process have come three novels and an anthology of short stories, including the newest geo-political thriller, Enemy In The Room.  I hope that you enjoy them.

If you would like to know more about my background, experiences, and faith journey, please read on. 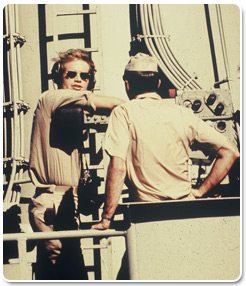 Officer on the USS Wainwright

In the four decades since I served as an officer in the Navy, I have been a real estate business professional, husband, entrepreneur, writer, teacher, father, speaker, mentor and grandfather.  From graduate school in London to developing an office building in Moscow with great Russian partners, I have developed real world perspectives on how faith should inform character and decisions.

After earning a Masters Degree at the London School of Economics as a Marshall Scholar and serving as the Communications Officer on the USS Wainwright (CG-28), I have been a commercial real estate professional for almost forty years.

My wife Alida and I live in Atlanta, where we have raised five grown children and are blessed with four grandchildren.

As a sometimes successful Type A achiever, it took me to age thirty-seven to surrender my ego and everything else to Christ.  That was in 1984 in Charleston.  It was the best and most significant decision of my life.  A few years later we moved to Atlanta and began attending Church of the Apostles, where we were immersed in teaching and preaching that emphasized God’s Word.

So my career has spanned four decades, and I’ve been a Christian for three of them.  Although I always enjoyed writing, it was usually of a business nature.  Only as I matured as a believer did the passion to write fiction transform my focus.

Much of the summer before I wrote On The Edge was spent in prayer, seeking God’s will for my life.  Several times that summer Alida mentioned that I should write a novel.  Her reasoning was that I wrote good letters to the editor. As I prayed that summer, I determined that if I ever did write a novel, it would be about how God had changed me.

In September I was driving alone on I-20 from Atlanta to Charleston to finish a business project when the characters and the basic two-tiered concept for a spiritual warfare novel came to my mind.  To be about a family in which all of the members are making bad decisions, and the consequences. I returned home the next day, took Alida to dinner at a local restaurant, and told her about the story.  She immediately said, “Yes, you ought to do that.”

So I went home that evening, sat at the computer, prayed, and the first ten pages of the book came out like a stream.  Every day afterwards I would do the same thing.  I told people at work that I couldn’t wait to get home to find out what was going to happen next!

The first half was written over the next few months, in the midst of holidays, trips to Moscow and Kiev, raising five kids, and working a full time job. It was one of the most amazing and wonderful times of my life.  The first publisher, Thomas Nelson, to whom I sent the manuscript replied that the book was anointed, and that they wanted to publish it!

I finished the book in February and began editing with Nelson.  While that was proceeding I began to write The President, because Alida told me that I should write a book about the government.

While I was writing that second novel, Nelson published On The Edge, and readers began telling me that the book had changed their lives!  How incredible that God could use a very imperfect real estate guy, mentored for years by an Egyptian Christian parish priest, to touch the hearts of people all over America and as far away as Russia!

The President is an action thriller about a President who struggles with life’s meaning while confronting terrorists who are bent on destroying the nation. The novel took two years to write because of the extensive research required, from the Founding Fathers’ positions on key subjects to the blast footprint of a nuclear bomb.  Happily there are great resources available for the former, and my cousin actually built nuclear bombs for the government, from whom I learned the latter.

Multnomah first published The President in a hard cover edition, and then three years later they re-published it in soft cover. Although it was written several years ago, most of the story threads read like they are lifted from today’s newspaper.

The genesis for Ten Lies and Ten Truths was the need to explain complex subjects to growing children, as well as to a Sunday School class.  Fiction has the power to involve the whole reader—mind, emotions, spirit—into a story, to open new doors and to connect cause with effect.  I found that fiction can often be more transformational than facts alone. 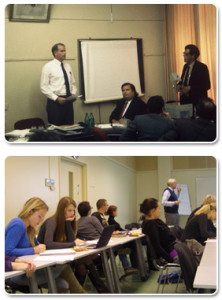 So I researched each of these important topics and wrote a story about the facts that I discovered. The goal of each story is not to convey all of the truth about a topic in a few pages, but rather to break up the hard surface of the reader’s preconceived notions, so that the seed of truth can take root and grow.

Soon after I finished Ten Lies and Ten Truths, Johnson Ferry Baptist Church used it as the basis for a ten week all-church study, and they created a Resource Guide that can be used today to dive deeper into the subjects, either as an individual or within a group study.  Their pastor, Bryant Wright, preached a sermon on each subject.  The Resource Guide is kept up to date with current information and I make it available at no cost to anyone who wants it. 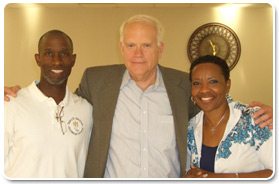 In 2010 I began posting to a new blog, which I call “the intersection of culture, business and government”.  Please sample some of the posts—they are all on subjects that I am passionate about—and then subscribe to receive new posts by email.

Finally, for several years worked on a third novel, an international action thriller, intersected by the fateful decisions of a modern Prodigal Daughter.   Enemy In The Room. It was published in October, 2013. The story threads are woven together with explosive action and crisscrossed relationships.  The characters confront high tech theft, internet spying, lies, jihad, betrayal, and redemption. Please visit our Books page for more information on it and the other books.

So I hope that you share a passion for at least some of the areas that are important to me—family, faith, economics, government, science—and I look forward to your feedback, comments and interaction.  All the best.