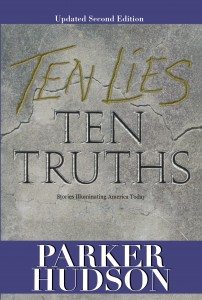 Ten Lies Ten Truths is a compilation of ten hard hitting short stories, each exploring one of the foundational lies in American life today. The subjects include marriage, abortion, relative truth, and macro-evolution. Immediately following each story is a specific statement of the underlying Lie, its corresponding Truth, and several non-fiction Resources for further study of the issue. These Resources include other books, scripture references, and websites.

The new 2016 Second Edition has all of the original stories, but the Resources for each subject have been expanded and updated. The E-book version is available now, and the print version will be available shortly.

We wrote Ten Lies Ten Truths for anyone who wants a short, memorable book which
1) gives them facts for discussing ten of today’s most important spiritual/social issues, in a form that is easy to understand and remember, and which
2) they can hand to a friend and say, “Read a couple of these stories, and then let’s talk.”