Effective Command and Control–There is No Plan B

When the next major terrorist attack, natural disaster, or widespread power/water failure occurs—and at least one certainly will in the foreseeable future—effective command and control will be crucial for fighting back and implementing countermeasures.  The terrible alternative to effective communication will be increased destruction and increased loss of life.

A hundred years ago, command and control was not so important or so complex.  Individuals and communities were much more self-sufficient.  Navy captains and Army commanders had more discretion to make local decisions, then report.  Today, we are all part of a complex system in which we usually wait at least for someone else’s information, and, in many cases, for someone else’s decisions.

That kind of integration and decision making—in the military, corporations, governments and the media—requires a robust, complex, and fully functioning system of communication.

Focusing on the most crucial of these—communication within the military, including local National Guard and police forces—my concern is with the lack of any Plan B for when the current complex communication system does not function.  What will we do? 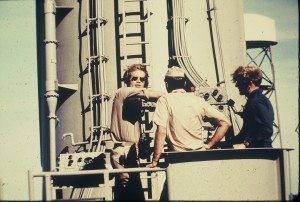 on a guided missile frigate in the U.S. Navy. We assumed that in a nuclear exchange with the Soviets, even of a limited nature, regular communications would be interrupted or lost completely due to electromagnetic pulses.  How could we mount an effective, coordinated defense, if no one could communicate?

The answer back then was in an old stand-by: Morse Code.  All of the Navy’s Radiomen knew Morse Code, and it was assumed that with enough power behind it, a simple dash and dot message could be blasted through the static and clutter, enabling at least basic command and control.

But in the early 70’s, the Navy changed its policy and required only a few specialists to know Morse Cods.  Now the expertise has largely vanished, except for signal lights at short distances.

Forty years later we are even more reliant on complex, computer driven, relatively fragile means of communication.  In the Navy and, actually, everywhere else.  How will you manage your family and your personal life if not one cell phone in a thousand miles works? For weeks or months.

What if our enemies are specifically targeting our communication systems?  Combined with an attack on people and property, a communications attack would seem to be a very easy way to escalate disruption and to inhibit effective correction.

I recently attended an unclassified but high level discussion of cyber security which included two very intelligent and knowledgeable government policymakers.  In answer to a question, one responded that in the area of national emergency communication, there is no Plan B.

And then he went on to make an obvious but important observation: “The market provides no process for creating a Plan B.  In fact, the market drives everyone to lower costs, and to join the outsourced/concentrated/complex communication system in order to compete.  Who needs to man a control room at each of several power generating plants overnight when one guy can monitor them all from his laptop at home, reducing costs?”

And so it all works, until it doesn’t.  Look at the Fukushima nuclear plant disaster in Japan.  Then 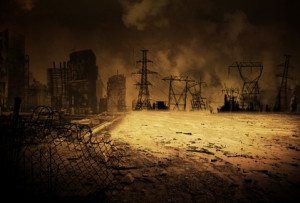 imagine an attack on several nuclear plants at one time in the U.S., combined with the resulting loss of electrical power and communication.  Imagine the escalating disaster because we have no Plan B for how to communicate and coordinate the defense or the response.

I thought the policymaker’s insight into the free market was most telling.  I don’t want the government “investing” and wasting hundreds of millions of dollars on Solyndra and other technologies that the free market will ultimately sort out without any government assistance.  But I do want the government to invest in technologies and systems which the free market is unlikely ever to address, such as an effective way for our security forces to communicate in an emergency.  Like national defense in general, finding a Plan B for national command and control seems like a very valid project for our government to be addressing.  But apparently we have not, and will not.

We waste money on special interest subsidies, green energy boondoggles, and corporate largess.  Then we have no money, and seemingly no will, to tackle the hard issues which only government can actually address.  How can anyone say that the size of the national debt doesn’t matter?  Five percent interest on $17 trillion is $850 billion per year. Is it imaginable that we could have an alternate command system for some small fraction of this amount?  But we probably never will, because of the incredibly dumb choices we are  now making.

This lack of foresight and planning will hurt us badly when the difficult day arrives.