Truth Has Consequences: Women and Men are Different

I’m beginning a series on common sense truths which are real, and which therefore have negative consequences when we ignore them or try to pretend that they don’t exist.

The following is written with two assumptions in mind:

Women and men are equal.  In value.  In worth.  Not because I think so, but because we were made that way.  God created male and female in His image, which is why we have the same worth.  And by the way, it’s also why a believer cannot be a racist, because we are all brothers and sisters, but that is a related story.

Men and women are of equal value in God’s eyes, but we are created with differences, and we therefore have some different functions.  This is not so hard to understand if you just look at us, or if you have raised a son and a daughter.

And we are wired to respond to each other in certain very predictable ways, particularly in our youth and at times of close and sustained contact, unless overridden by rules and norms. Believing macro-evolutionists should agree with this assessment, for the “good of the human race”, i.e., procreation. 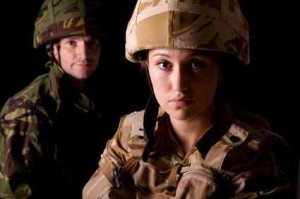 The elitist progressives in our country seem to have checked their common sense and normal experiences at the door, insisting instead that there are no real differences between the genders, and whatever minor ones may exist, we should be able to ignore them and get on with being all the same.  Particularly in the military.

Are they crazy?  And why have we allowed them to convince us that something we know to be true is instead false?  That makes us accessories to all of the havoc that is now following.  We cannot change common sense truth; but we will all suffer the terrible damage of pretending that we can.

Look at just a few of the consequences of pushing young women and men together in close quarters in the military, often under extreme stress, and occasionally requiring life and death decisions:

The purpose of the military is to protect and defend our nation.  It must train and work efficiently, because when pressure hits, every member must be able to do his job effectively and well.  There are already enough challenges in the constantly evolving threats of our enemies without us adding more challenges and impediments.

Everything written above seems to be utterly common sense truth to me.  In light of these truths and the consequences of ignoring them, what exactly have the progressives gained for us from the social experiment of pushing women into front line and combat roles?

All of us, women and men, should want our military to be the best at what it clearly has to do.  Not a failure at what others have made up for it to do.