Daddy, Y Are We Hunting for Eggs?

Last Saturday we made our usual afternoon trip to the local Y to work out.  Outside the front door was a large inflatable bunny and a sign inviting us to the Eggsplosion Egg Hunt, which we had apparently just missed. 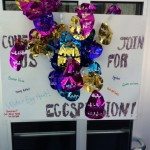 Some young children were leaving with their parents, having their pictures taken with the inflatable bunny.

Inside at the front desk was a second sign, and throughout the building there were others. Lots of information was on the signs, including an invitation to the Bunny Buffet (we hoped no rabbits were eaten),   But we noticed that nowhere on any sign was the word Easter ever mentioned.  We determined that Eggsplosion was a secular, politically correct hunt for eggs that just happened to occur in late March this year.

As most people of our age know, but the younger generation probably does not, The Y began life as the Young Men’s Christian Association. 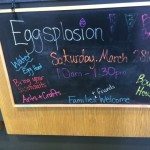 We wonder what the founders of the YMCA would think about removing the mention of Easter from the party for children emphasizing rebirth, and from the premises in general, one week before the celebration of the pivotal event in history.   For a hint about the founders’ beliefs and motivations, an excerpt from the YMCA’s website is worth repeating in full:

In 1844, industrialized London was a place of great turmoil and despair. For the young men who migrated to the city from rural areas to find jobs, London offered a bleak landscape of tenement housing and dangerous influences.

Twenty-two-year-old George Williams, a farmer-turned-department store worker, was troubled by what he saw. He joined 11 friends to organize the first Young Men’s Christian Association (YMCA), a refuge of Bible study and prayer for young men seeking escape from the hazards of life on the streets.

Although an association of young men meeting around a common purpose was nothing new, the Y offered something unique for its time. The organization’s drive to meet social need in the community was compelling, and its openness to members crossed the rigid lines separating English social classes.

Years later, retired Boston sea captain Thomas Valentine Sullivan, working as a marine missionary, noticed a similar need to create a safe “home away from home” for sailors and merchants. Inspired by the stories of the Y in England, he led the formation of the first U.S. YMCA at the Old South Church in Boston on December 29, 1851.

How did the Young Men’s Christian Association become the Y, and along the way not only stop celebrating Christ, but become so PC that Easter cannot be mentioned?

For an indepth study which describes the many small steps, and the critical importance of Board members, see this interesting article by Peter Greer and Chris Horst.

This may seem like a small deal to most people, but, as Greer and Horst point out, our nation’s foundations are rotting away one seemingly “small deal” at a time.

There are of course many reasons to mourn the dumbing down of this great Christian institution, but two jump immediately to mind.

Second, as I have pointed out several times in earlier posts, the amazing difference that de Tocqueville and others noticed about America almost 200 years ago was not that we were a stratified theocracy, but rather that general Christian faith was woven naturally and with great strength into the general laws, beliefs and mores of the society at every level.  We sorely miss that Christian tapestry today, and the YMCA was one of the many non-church institutions which provided a strong fiber for the weaving.

Finally, I understand that today our nation is more diverse than it was 200 years ago, and that is also potentially a great strength, if we retain our common core values.  I am not advocating the removal of anything that smacks of a religious celebration from the public square.  In fact, just the opposite.  As provided in the Constitution, we are guaranteed the right of free expression of religion, and the YMCA should invite all children to an Easter Egg Hunt, and of course celebrate Passover.  And any other religious rememberances desired by a local branch’s membership.

I may not agree that your religion is true, but I will defend your right to believe it is, and to proclaim it (peacefully).

Please, Board members, local staffs, and membrs, encourage Christians, and the Young Mens’ Christian Association in particular, to do the same.  Let’s not be so afraid of offending someone that we have to rename our Easter Egg Hunt the Eggsplosion.

Our local Y also has  at the front desk a Daily Riddle Board.  Last Saturday I wanted to write “What Is Easter?”, hoping that some young person might ask.