I was rummaging around in the future and found this Boy Scouts of America policy document, distributed in 2023.  It was written for the large group of gay Boy Scout leaders who began entering the movement after the national organization ended its ban on gay leaders in 2017 .  I believe you will find the following excerpts to be interesting.

As we look back on the incredibly progressive changes in Scouting during the past few years, GAG is thankful that those in gay leadership roles did not follow the advice of then-BSA President Robert Gates on Gay Leaders, “we must deal with the world as it is, not as we might wish it to be.”  Instead they courageously pushed forward for the world they wished for, and through their hard work and constant vigilance we have now almost arrived at the completely equal world which we all seek.

But there is still work to be done to insure that a new generation of gay boys is encouraged to find themselves, and to grow up strong and empowered. It is up to you, as a gay Boy Scout Leader, to help identify these boys and to advance these same ideals on the individual, local level, presenting the LGBT lifestyle as equal in every way.

Clearly it is inappropriate and illegal for an adult leader to have any type of intimate relationship with a boy or a young man.  That would be pedophilia, and such conduct is absolutely forbidden by law and by Scouting.

Looking more long term, however, we are reminded that from its inception Boy Scouts has often produced strong bonds between Scouts and their adult leaders.  These relationships may then last for decades.  So while intimacy is illegal while the boys are Scouts, in a few short years they will be eighteen and free from the adult/child prohibition.  At that point you will be free to expand and deepen relationships for which you are now planting important seeds.

Until then it is best to use older Scouts who have already committed to the LGBT lifestyle to help new boys realize their natural orientation.  In that regard, you should always be alert for any early indications of gay orientation or activity, and ask the older boys to do the same, so 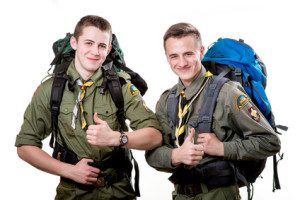 that you will then be in a position to counsel the younger boy that he is, in fact, and always has been, gay.  With this kind of coordinated LGBT leadership between the adults and teenagers, there should always be a new group of gay boys finding their true identities while also enjoying other Scouting activities.

And keep in mind that whenever it is customary and appropriate for safety or good behavior that an adult be present, you may not be excluded from fulfilling this role.

You and another gay Scout Leader may fulfill the “Two Deep” Adult Presence requirement in Scouting, and may therefore together supervise Scouts in activities like swimming, camping, sports, etc.  And of course, like all Scout leaders, you will be a teacher, role model and counselor.

On the national level, as you know, GAG is working with other Scouting leaders to make the Scout Oath more inclusive, and to take away a key trigger word that could make a young man feel scared or unhappy.

On my honor, I will do my best
To do my duty to God and my country and to obey the Scout Law;
To help other people at all times;
To keep myself physically strong, mentally awake and morally straight.

GAG has proposed to replace the final word with “strong”.  We hope that you will do all you can to support this initiative at the local level.

Similarly, the hate-speech implications in the Scout Law are also being reviewed for improvement.  The Scout Law now reads:

Since the word “Brave” can refer disparagingly to a Native American, GAG has proposed to replace it with “Courageous”.  And of course “Reverent” is both incomprehensible and potentially frightening to a boy who is not from an old-school faith heritage, and so GAG believes that “Relevant” should replace it.

So the last five laws would thus read: 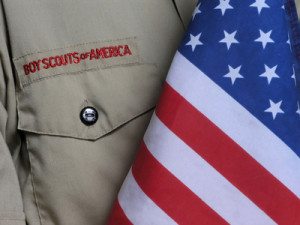 Most Merit Badges require a great deal of individual study, hard work, and counseling from experts.  In the latter role, you will be in a key position to influence the next generation of young men in America.

Our key focus at GAG is on the following items in bold:

As the Family Life Merit Badge counselor you will have the opportunity to insure that the discussion of sex includes all ways that two or more people can express their love for each other.

As a note of caution, we have found that it is probably not a good idea to describe in great detail some of the ways that gay men express this love, since until a young man is involved in a loving relationship, the details may incorrectly seem “gross”.

That is why having you, the gay Scout leader, in each boy’s life is so important.

GAG adamantly rejects the false allegation that the precipitous downturn in Scout membership since 2018 is in any way related to the inclusion of gay men as Scout leaders.  The decline began earlier, and can be attributed to the rise of videogames, smartphones, and other trends.  In fact, by dropping its earlier ban, Scouting has opened its ranks to an even larger potential participant group, now also including all those parents who want their young boys and teenagers to be trained and counseled by, and to go camping with, gay men.