Afraid of a Vote? 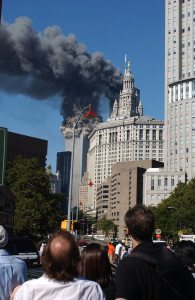 Crowd watches South Tower of the World Trade Center in Lower Manhattan collapsing as a result of terrorist attack on September 11, 2001 at 9:59 am photographed from Chatham Square near Chinatown. The upper structure can be seen in motion crumbling downwa

Is anyone else struck by how shamefully ironic it is that President Obama and the Democrats in the Senate wheedled around not even holding a vote on the Iran “deal” on the very Anniversary of the 9/11 Attack on our nation?

That attack was led by Islamic terrorists, just like the ones Iran is going to fund with the billions of dollars we are about to give them.

I’m not sure, but I don’t think even Neville Chamberlain paid Hitler to build up the Nazi Army so that he could better attack Europe and England two years later.

Have we already forgotten?  Has wishful thinking overcome the reality of Iran’s clearly stated intentions and actions? Has our leadership gone mad?