I don’t know about you, but for a long time I’ve been in a “funk” over next year’s election.

All of the Progressives are in lemming-like lock-step to expand access to abortions, thereby killing more innocent Americans; and to remove the President over actions which at this point seem no worse than what I believe their own side has undertaken. Before even considering the usual election issues like immigration reform or the deficit, I simply don’t see how I can support any of them because of these major foundational flaws.

But speaking of flaws, there’s our President. I can’t stand how he denigrates and trashes people, many of whom he originally hired or appointed, and credits virtually every success to himself while blaming every setback on others. In my experience, that’s not what real leaders do. His behavior is utterly short sighted and narcissistic. The good counselors who could provide wisdom and divergent opinions give up and depart.  And his “all about me” approach leads to a flood of tiresome daily dramas that drain the public square of good will and make any chance at cooperation for common goals almost impossible. 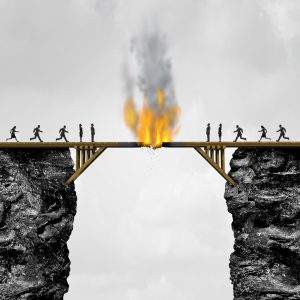 Many people, after giving him a chance in 2016, won’t vote for him again because of his constant personal drama and lack of character, which will then probably elect one of the aforementioned lemmings–a tragedy for our country.

In this quandary I finally did what I should have done long ago: I turned to God’s Word and to prayer.

In the introduction to Handbook To Leadership—Leadership in the Image of God, the three authors (Boa, Buzzell and Perkins) point out that Jesus didn’t speak directly about the qualities of Godly leadership very often, but he did specifically describe two fundamental requirements:

1. The leader’s character counts more than any other factor of leadership and that character is best molded and shaped by Jesus’ own teachings. (Luke 6:39-49), and

2. The only approach to leading which Jesus validates for His followers is Servant Leadership. (Matt.20:25-28).

Regular readers in this space know that I have wrestled with our President’s personality, statements and actions since before the 2016 election. So much was and is written about him, pro and con, that it’s difficult to get a clear picture of the man himself. But then Luke 6:45 provided the insight I needed: “A good man brings good things out of the good stored up in his heart, and an evil man brings evil things out of the evil stored up in his heart. For the mouth speaks what the heart is full of.”

I believe that our President’s Tweets and off-hand statements reflect his true, unvarnished, un-spun-by-others character, because “the mouth speaks what the heart is full of.” And it is not pretty. His words confirm that he is incredibly self-engrossed—not the best raw material for a Servant Leader. The Handbook continues: “The leader’s job, as Jesus went on to demonstrate, is to help their followers become heroes.

Leaders who serve their followers by equipping them to be the best they can possibly be are leading the way Jesus intended…Those who follow Jesus’ teaching and live in a personal relationship with Him are made into better people than they could ever have become without His leadership.” (page 3)

The only person I know more self-engrossed and flawed than President Trump is me. At least until He showed me my sin and the destruction I was causing, and I repented and turned my life over to Him. He had His way with me at age 37, but I could have been 17 or 77. God is very much in the transforming business.

So rather than be in a funk, I should be on my knees. I wrote one novel about the power of prayer to transform someone like me (On The Edge), and a second novel about a secular President whom God transformed into a believer half through his first term, thereby redeeming the nation (The President). Am I then really too dumb to realize the answer to my problem?

I understand that only God knows someone’s heart–I can only speculate about another’s relationship with his Savior, and I could be wrong. But based on what I see and hear from Donald Trump, I have resolved that I must pray for him as I would any other person, particularly a family member or a friend, who needs to surrender his life to Christ as his Lord, and as the only source of true strength.

I am therefore now praying for our President’s personal transformation into a man who is a genuine follower of Jesus, seeking God’s heart in all that he does. Into a man who is so sure that his own story is part of God’s greater story that he does not feel slighted or harmed by anything that others say or do. Into a man who seeks wise counsel, who waits before he speaks, and who spends real time on his knees and in God’s Word to understand the true Commander-in-Chief.  And the same for his close family members and advisors.

Probably most of us pray for our nation and for our leaders, particularly for the office of the President. But I now encourage us to go deeper and to pray specifically for the transformation of the man Donald Trump into a repentant follower of Jesus who will become a genuine servant leader for those around him and for our nation. Given the secular power that he commands, what might he accomplish across the globe if he brought grace, others-focus, and God-inspired quiet wisdom to every situation and relationship?

And how easy it would then be to vote for him.

So I will be praying at least daily, pleading with God to do for Donald Trump what He did for me, and what He continues to do every day, if I seek His will: conform me more to whom He wants me to be.

If you agree with praying daily for this man and his family, please consider sharing this post with your friends and family. God answers prayers. All the best.