In one of God’s “thin threads” of unexpected connections, I just finished a book about an American hero whom I did not know just a few weeks ago.  And yet her life has immediate implications for my current thoughts and actions.

The book is The Appalling Strangeness of the Mercy of God, which is the story of Ruth Pakaluk, as told by her own letters and by her husband, Michael.

Ruth was born in 1957 in New Jersey. She lived for 41 years and died in 1998 of metastasized breast cancer.  Dr. Daniel Reilly describes her life in the Foreword to the book, which gives: 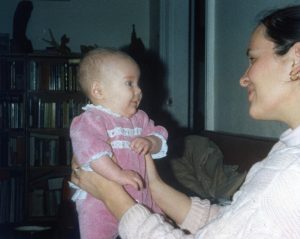 “…a very personal and honest glimpse of the life and spiritual growth of a woman who in high school abandoned her belief in God but in her twenties became [an Evangelical Christian and then] Catholic. It is a story of a Harvard grad who was a stay-at-home mom. It is an account of a wife and mother who saw meaning, purpose, and abundant opportunities for holiness in raising a family, struggling to pay bills, rushing to ballgames, singing in her parish choir, and teaching…

“Along the way she would bear seven children and bury one. She would debate abortion on college campuses, host her own television show, and become the president of a statewide pro-life organization…Through it all she battled breast cancer with a wit, grace and joy of life that inspired longtime friends and casual acquaintances alike.”(p.9, emphases added)

I recommend this remarkable book to you. As Michael writes about Ruth, “The life of a Christian hero who is a housewife and homemaker actually doesn’t resemble our own experience; it is our own experience, and it Is most typically simple, humble and ordinary.” (p. 21, Michael’s emphases)

My purpose here is not to pen a review of the book, but rather to note how it has impacted three related areas of my current life, twenty years after Ruth’s death.

First, Ruth’s life reminds me that our first priority in life should be to people. By that I mean to focus on both our personal integrity and on our relationships with everyone else, from those whom we love deeply to those whom we just met today. 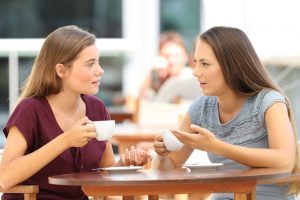 As my friend Carmen LaBerge pointed out in her talk at last year’s Tampa Prayer Brunch, as Ambassadors for Christ in this unchristian land, we should first focus on people, not issues. God’s best opportunity to transform someone through us comes when they see something different about us, and when we genuinely love and care for them, whatever the issue or the circumstance.

Ruth Pakaluk walked that walk, despite challenges and issues that could easily have derailed her.  Whether she was writing an unbelieving friend about faith, or debating a pro-choice advocate, she did so with grace, honesty, integrity and love. And always the foundations for everything else were her faith, family and friends. In short, Ruth’s life of servant leadership in others’ lives gave her a platform of integrity for addressing issues in a way which then cried out to be noted and considered.  You may not have agreed with her, but you could not ignore this intelligent, loving woman.

Second, when Ruth did turn to issues, she applied her faith to the answers but then always looked for ways to win over the greatest number of new allies, irrespective of how those people might agree or disagree with her on other matters of faith, politics, social policies, etc.

It strikes me that her individual example typifies the important and almost uniquely American way to approach issues and problems.  Notice how her argument against abortion expands beyond her personal religious beliefs to include all of humanity.   Her husband Michael summarizes her many letters and talks on this subject like this: 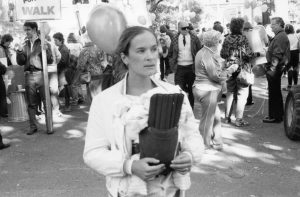 “Human rights are rights that pertain to us simply in virtue of the fact that we are human, not for any reason above and beyond that; the fundamental human right is the right to life, and so, if that right is denied, then all human rights are in effect denied; the thing growing in the mother’s womb is surely alive (otherwise it would not need to be killed by an abortion), and it is human; thus, to deny that the thing growing in the mother’s womb has the right to life is to deny that anyone has any human rights whatsoever.” (p.61-62)

Ruth’s argument should appeal to anyone and to everyone: believer, non-believer, atheist, Muslim, Jew, Hindu, secularist, progressive, so long as you are human.  And, also importantly, it should appeal to believers who may disagree with her on contraception, infant baptism, or the Pope.  Those are issues which can be discussed and debated, but more important is the action issue which we can unite around today. Building that kind of coalition around issues on which we can agree is the foundation of a peaceful democracy.

Now look how what Ruth wrote in a letter to a friend in October, 1984, exactly informs how I plan to vote in this year’s mid-term election: 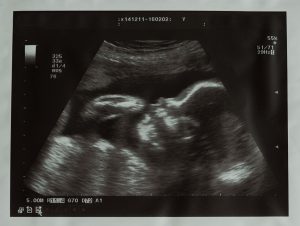 Ultrasound scan of a twenty four week old baby in a profile view lying on its back and sucking its finger.

“I’m on the verge of becoming a registered Republican. The Democratic party’s wholehearted endorsement of abortion is what prompted my shift, but as I think through other issues, I find I am coming closer to the free-enterprise, minimize-government mentality of the current administration. I have serious reservations regarding that approach in areas like pollution. I have serious reservations about arms buildup. But I know that abortion kills a member of the human race. That is not a religious belief; it is a simple biological fact. I know that the human being in the womb can feel pain certainly by the mid-second trimester, and probably much earlier. I know that there are at least forty thousand late second-trimester abortions (and some even third trimester) performed in these United States. I know that as well or better than any German citizen knew that Jews were being gassed in concentration camps. There is no justifiable reason to kill an innocent, non-threatening human being. As far as I can tell, all of this adds up to one thing: I am obliged to do everything in my power to defend the rights of members of the human family who are being legally put to death. That means I cannot possibly vote for any political candidate who tolerates, let alone applauds, the status quo…I still don’t know what I would do if the price of speaking out were my own death, but it is inconceivable to me that I could sit idly by while our society condones the killing of innocent infants.  I don’t like leafleting.  I don’t like picketing.  I don’t like political activism; but I don’t have the freedom to choose to remain silent.” (p.113-115, emphases added)

Sadly for a vibrant two-party democracy, in the intervening decades the litmus test to be a Democratic candidate at any level appears to require strident allegiance to abortion.  Not even considering their ever-more-whacky economic and social ideas (like guilty until proven innocent), the words written by 27 year old Ruth Pakaluk speak truth to me.

Finally, her emphasis on bringing disparate people together to agree on the truth of an idea is the opposite of today’s focus on tribes and identity politics, which I have argued earlier could lead to the undoing of our nation.

The elites want to lump us all into tribes, or groups, and then tell us how we must think, act and vote to defend ourselves from people in another tribe who are not like us. To prevent us from becoming victims. And usually the key step is to put, or to keep, those speaking in power.

The worst American examples of tribalism were of course slavery and the treatment of Native Americans. Southern white elites used every means possible to keep whites and blacks separated and wary of each other. Even after this most blatant use of identity politics almost destroyed the nation in a civil war, Southern Democrats continued the drumbeat of separation for another hundred years. And today’s Democrats have expanded the groups to keep separate and suspicious of each other to include blacks, women, men, Latinos, elderly, rich, young, poor, etc., etc.

Instead of looking for ways to unite people from different backgrounds to advance a common idea, as Ruth Pakaluk did (also the Founding Fathers, Abraham Lincoln, and a few others), these people want us to withdraw from the public square and to throw barbs at people who are not like us. 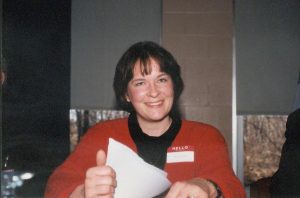 And they are outraged when people jump their expected tribal boundaries: a black man espouses conservative economic principles; a black woman wants a husband for her children; a white man like me opposes the War on Drugs; a female Senator votes to confirm a male Supreme Court Justice. Don’t these people know what they are supposed to say and do because of their tribal identities?  How dare they read, think, discuss and act on their own set of ideas, rather than their tribe.  As I have said before, if we continue down this road of Identity Politics instead of Issues, we may well tear ourselves apart.

So, unexpectedly reading this great book about Ruth Pakaluk, a young American hero, has reminded me that:

And a sincere thank you to Michael Pakaluk for graciously providing the photographs of Ruth.